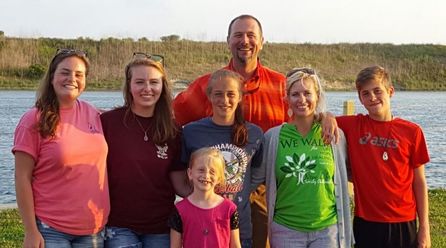 ​Shortly after Joel and Robin were married God called them to Seminary where Joel was challenged with God’s love for the world and what the Angel family’s response should be to it.  Robin received her call to missions as a young girl while in GA’s.  The Angel’s surrendered their lives to God’s call to missions and arrived in the Middle East on September 11, 2001!!  The Angels arrived with a message of God’s love the same day others arrived in New York City with a message of hate.

During their eleven years in the Middle East not only their family grew to five children but they too grew in trust of God’s faithfulness and provision through a medical and a military evacuation.  The Angels have a special place in their heart for all peoples and especially for Muslims who Jesus gave his life to redeem.  The Angels lived in several different countries in the Middle East and among several people groups, including refugees.  In 2012 God brought their time in the Middle East to a close through some health issues and called them back to the states where Joel served as a Mission’s pastor in a local church for 5 years.

In the summer of 2017 God used the Angel’s oldest daughters’ service with Nehemiah teams to bring Joel to NE Alabama to help train students.  This was Joel’s first time to return to Sand Mountain where Joel’s Great-great grandparents had once lived.  This was very significant because the “roots of faith” in his family began on that mountain!  It was then that Joel and Robin received their call to be a part of what God was doing through training and sending through Nehemiah teams.

If you would like to be a part of the Angel's ministry, donations can be made via cash, check or PayPal and are tax deductible.